New or modernized and expanded Chinese railway line in the picture below. Will it be difficult because of mountainous areas to connect this railway line to the already existing railway that extends south of the Caspian Sea from east to west through Iran and into central Turkey and Ankara and beyond to Istanbul? There is nothing that suggest it. The oil from Baku must reach further, otherwise it would make no sense to build a railway line from Baku to Turkey. But the oil does not come by railway trains. There are existing oil pipelines from Baku to Istanbul via Georgia, and from Baku to Turkey’s southeast coastal area via Georgia. Russia is present in Syria’s western coastal area south of Turkey, with a naval base in Tartous with the S-400 and S-300 air defense systems deployed, and an airbase protected by air defense systems in Latakia located about 100 km north of Tartous. Given these oil pipes running through Turkey and the railway line that looks like it stops indefinitely on the map below, who knows where it will be drawn next.

There are reportedly also 40,000 Russian citizens in Syria of which most probably are tourists in the unharmed Tartous or Latakia or the rather untouched central Aleppo, whose presence should not be extenuated when Russia implements its major strategy plans and tries to obstruct others. Russia is now (2018) caught up in the game. China wants to expand the oil pipelines to Turkey’s southeastern coastal area, Russia probably does not want this as long as China also aspires to expand the “Silk Road Economic Belt” by land towards Europe, because this threatens Russia’s southern front.

Russia is thus dependent on the turncoat state of Turkey and that Beijing does not have Turkey in their pocket, and they have, among other things, therefore, had negotiations with Turkey about initiating a sale of the S-400 Triumph air defense system to the country. Turkey has already made an advance payment and is hoping for delivery by 2019. The issue is discussed according to what Kremlin adviser Vladimir Kozhin told the Russian news agency TASS in September 2017. The Russian leadership is often forced to concentrate resources, preparations and efforts to Russia’s southern and eastern borders. Many times it is of a military and economic nature. These playfields are primarily much more important for Russia’s security than the Baltic issue is. Much of their strategy in the northwest is a luxury they can sometimes engage in. 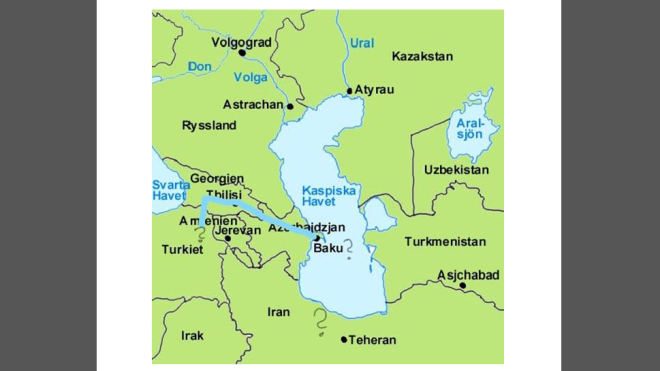 Azerbaijan, Georgia and Turkey thus put an 826 km long railway on their territories (reported in November 2017). The question is whether the Chinese want or intend to resolve the issue of how to pass over or under the 300 km (186 miles) long stretch of the Caspian Sea. Traveling 300 km across the Caspian Sea from Turkmenistan to the oil-rich Baku by ship is a realistic solution. They also probably see a solution with an existing railway line south of the Caspian Sea in Iran. I don’t think Russia is happy about these plans because the influence over the oil-rich Baku is slipping over to China’s court. The Russian interest will probably be shifted to the south and towards China in the near future. But in St. Petersburg and in Kaliningrad, Russia’s plans will continue as usual. It is cunningly done by the Chinese to make Azerbaijan, Georgia and Turkey invest in China’s evil scheemes for Europe. But this railway is just one of all the railways, roads and fairways, which together make up the modern Chinese Silk Road Economic Belt project. Bit by bit and under obscurity, they are single-mindedly building on this logistical venture’s partly civilian project and partly military project. The silk road is the largest logistic project of all time, which requires a well-developed infrastructure, project planning and investments in transit countries.

The problem with the silk road project is not primarily that there are no good roads. It is laying down oil and gas pipelines, the creation and maintenance of infrastructure such as gas stations, service stations, power stations, drinking water, animal husbandry, agricultural production, food processing and irrigation projects in the silk road transit countries that the challenge lies in. It requires even more fuel and resources of fresh water. Creating opportunities for this can easily be a geopolitical gamble. It will be difficult to provide maintenance support for entire armies. Deserts must be crossed and power plants require fuel, nuclear power plants require water, personnel require drinking water. Perhaps one has to bypass some of the railways with a regular road where the transported vehicles move on their own machine. But they can also lay down water pipes to the steam generator in nuclear power plants. Not even on a multi-track railway, can you transport as many combat vehicles as needed in a short time. Towing vehicles, drinking water, fuel, tires, service personnel, spare parts and rolling mechanical service stations for trucks will require a large part of the space in the trains. Iran doesn’t lack oil but they have a quality on their oil that is not suitable for making diesel from, which means that diesel is rationed and reserved for Iranian truck drivers.

Locomotives probably require relatively flat ground if they are to be able to pull long and heavy trains fully loaded with tanks and fuel. That being said, the world’s highest railway line is Chinese and crosses the Kunlun Shan 3,000-5,000 meters above sea level. It is called the Qingzang railway. It is conceivable that a railway line, if it is not stretched over or through mountains, runs from Inner Mongolia (belonging to China) to Gansu to the Uighur land Xinjiang, into Kazakhstan, Uzbekistan and Turkmenistan and further via southern Iran along the coast of the Persian Gulf and further northwest through Iraq and Syria and southern Turkey. In a war, southern Turkey becomes the most vulnerable stretch, requiring control of the eastern Mediterranean. From Beijing to Istanbul, the train route is >14,000 km of country road which I describe above. But the Chinese may have to punch at least one hole in the Chinese wall, which is actually several walls from different eras and which are on the UNESCO World Heritage List. 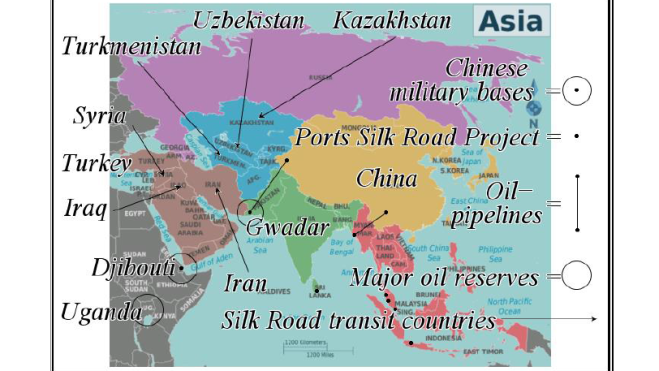 The Chinese are planning infrastructure investments for a railroad, a country road and oil pipelines between the port city of Gwadar in southwestern Pakistan and Kashgar in western China, or are already building them. It sounds quite logical. What then follows causally is that China completes the port of Gwadar for their Naval forces and merchant ships in southern Pakistan at the Arabian Sea and a military airport, if they get permission from Pakistan. According to the Financial Times web release in May 2011, Pakistan’s Defense Minister has requested from China to build a Chinese military base for Gwadar’s port. In Uganda 1 200 km southwest of Djibouti there are giant oil reserves. It does not have to be said that the great powers are fighting hard for these oil reserves, which are estimated to exceed the total oil reserves of the OPEC countries put together.

It has been established that the total raw material resources under the Caspian Sea is almost twice as large as all commodity assets in the whole of the United States. Kurdistan has the so-called Taq taq field and has increased its production of oil more than one hundred times from 2,000 barrels of oil a day since new discoveries were discovered in the 00’s. On the border between Kazakhstan and Russia, there are huge reserves in the Karachaganak field, 42 trillion cubic feet of natural gas as well as liquid natural gas and crude oil. In Turkmenistan, there are gas assets of no less than seven hundred trillion calculated cubic feet in the ground, the fourth largest deposit in the world. In addition, gold mines in Uzbekistan and Kyrgyzstan are part of the Tian Shan belt. These are the second largest gold deposits in the world after the Witwatersrand mountain in South-Africa. Both Beryllium, Dysprosium and other Rare Earth Element metals have been found in Kazakhstan. These are important in the manufacture of mobile phones, laptops and rechargeable batteries, as well as Uranium and Plutonium which are necessary for nuclear energy and nuclear warheads.

In eastern Ukraine towards the border with Russia in the Donetsk basin, where there is a state of war, there are coal resources with up to about ten billion tonnes. U.S. Geological Service states that there are 1.4 billion barrels of oil and 2.4 trillion cubic feet of natural gas in addition to considerable amounts of liquid natural gas. Also the fertile black topsoil of Ukraine and southern Russia is sought after. A non-governmental organization has concluded that land worth nearly $ 1 billion in Ukraine alone is being dug up and sold annually. Crop failure and war in Ukraine affect both the price of technology products, cereals and oil.

An expanded and existing railway line between China-Germany will soon reach Paris. Major investments in those transcontinental rail lines have opened for freight routes along the more than 11,000 km long international Iuxinous railway, which runs from China to Duisburg in Germany. 800 m long trains have begun to transport millions of laptops, shoes, clothing and other consumer goods in one direction, and electronics, car parts and medical equipment in the other on a journey that takes 16 days. Significantly faster than the sea route from Chinese ports in the Pacific. Source: The Silk Roads; by Peter Frankopan

We know that the US facilitates the economic development of the Central Asian former Sovjet republic “Stan-countries”. But it can be for more than one reason. Why do you think the US do this? I mean, they’ve already left Afghanistan.