There is a slim possibility for the Americans, but still a possibility, to fuel conflicts on several fronts so that they would not have to face China alone. Here’s what the CIA’s former public site LIGNET expressed on July 17, 2013:

Why the Indian Ocean Could Be the Next Theater of War
While China has loudly trumpeted its new aircraft carrier and its developing “blue water” navy, India has quietly embarked on its own naval modernization program, with a new aircraft carrier on order from Russia and a new nuclear submarine now undergoing sea trials. Both China and India have their eyes on the Indian Ocean and on guarding the oil tankers that traverse it. The recent advances in the navies of both nations set up the potential for a clash there.

China, Russia Compete for Influence Over Central Asia
China and Russia are engaged in an intense rivalry for hegemonic control over Central Asia, a rivalry that could jeopardize the close friendship that has developed between them over the past two decades. What will China’s unquenchable thirst for energy and Russia’s desire to revive the glory of its former empire mean for the future of the region? 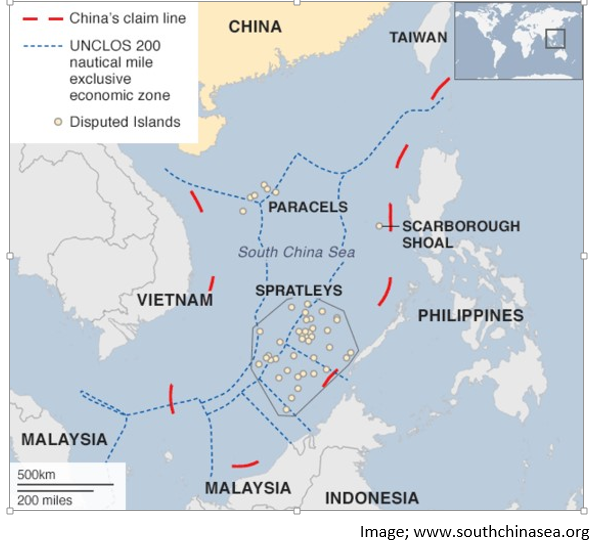 The United States has no desire that the Spratly Islands and the Paracel Islands in the South China Sea should explode in their face. Some of the Spratly Islands are controlled by Vietnam, others by the Philippines and some islands by Taiwan and some by China. The islands are hard to reach but the surroundings are believed to contain raw material resources. Due to the seemingly unresolvable disputes, there have been no serious explorations of deposits in the areas, so the estimation of commodity resources is largely extrapolated from mineral deposits in neighboring areas.

China has built a runway, 10 flight minutes in mach 1 (approximate speed for sound waves or 1,224 km/h) from the Philippine Islands, on one of the Spratly Islands called Mischief Island 200 nautical miles (370 km or 230 miles) from the Philippines. Conflicts (i.e., Chinese hijacking) regarding the ownership of the islands are undesirable. China claims virtually the whole of the South China Sea and commits violations of other countries’ legal rights to an economic zone under the UNCLOS Convention on the Law of the Sea. China calls their self-imposed demarcation lines for the nine-dash line.

On the largest island, known as Woody Island in the States, in the disputed Paracel archipelago south of China, it is believed that China has deployed surface-to-air missiles. In 2012, China established a military garrison as well as the city of Sansha on the island to administer the entire South China Sea. In 2015, China temporarily deployed fighter jets on Woody Island. Many countries claim ownership of several of the Paracel Islands in the archipelago, countries such as Taiwan, Vietnam, the Philippines, Malaysia and Brunei. Woody Island is located about 300 km (186 miles) southeast of the giant island of Hainan in southern China.

China wants to conduct bilateral negotiations, but many of China’s neighboring countries argue that China’s strength and size are giving the country an unfair advantage. ASEAN (Association of SouthEast Asean Nations) cannot even resolve the dispute. The US says they do not choose side in territorial disputes, but they have frequently sent military ships and flights near the disputed islands and they call it “Freedom of navigation” operations. In addition to these islands, there are dozens of rocky reefs, atolls and sandbanks, such as Scarborough shoal, mostly uninhabited. These data were current in July 2016.

Already President Obama declared in his State of the Union speech on February 12, 2013, that he (America) intended to pursue a Pacific Trade Agreement. With these few words in an one-hour speach he declared his intentions:

”To boost American exports. Support American jobs. And level the plane-field in the growing markets of Asia. We intend to complete negotiations on a transpacific partnership. And tonight I’m announcing that we will launch talks on a comprehensive transatlantic trade and investment partnership with the European Union. Because trade that is fair and free across the Atlantic, supports millions of good paying American jobs.”

What did he mean by “And level the plane-field in the growing markets of Asia”? It can only be interpreted in one way; an Obamish economic War declaration against China, by financially binding other east Asian countries to the United States, North Korea excluded. It should have been a piece of cake but Trump is less skillful and kid-gloved than most people.

Was it China that started the contentions? In 2012, China initiated formal talks in an economic union with a number of countries in east Asia and other places, including Australia, New Zealand, India, Japan and South Korea. The rounds of negotiations have succeeded each other and are known as RCEP (Regional Comprehensive Economic Partnership). The discussions have been going on for a long time, but God knows if they have reached an agreement as late as in November, 2018.

What do You think Obama meant by “And level the plane-field in the growing markets of Asia”? Was it an unfriendly perhaps even hostile sentence?

And if it was hostile, was it a legitimate sentence? Please motivate your conclusions! Before answering the question, I want you to make an effort to justify your conclusions by searching for background material about the conflict so that you get training in fact finding and screening of information. Don’t come back to me with a foggy response, because you are biased and think this and that, only trying to prove what you already presuppose.

Fact searching means being able to walk a few miles in your opponent’s moccasins, i.e. you need to search for information and screen information not only on the home team’s site but on all possible sites. It is not the same as being unbiased because nobody really is, but If you always assume that your home team is right and that you therefore do not need to listen to the other side, you might as well skip doing this homework altogether. Be generally critical when seeking out information.

Every time you get suspicious, keep the thought in the back of your head until you can confirm it or until it has been falsified, even if it will take years of fact searching and contemplating. Your level of perseverance determines if you will become a good intelligence person or not.