I suspect organized incendiaries, like we had in Västergötland and Småland in Sweden in 2018. Even though it was just as hot in the whole of Sweden that year, the many separated fires started only in those two regions. In Småland it was even concentrated around one community. By looking at the satellite image below one can easily conclude that the fires in Australia all originates from populated places. It’s suspicious that all these fires starts almost all at once, and as it seems, all in Australia and not the other parts of the pacific area.

I think we can be pretty sure what group of people started our fires here in Sweden. In Australia however it is not so easy to single out one group of incendiaries. There are two groups. There is a country called China which can stand behind such atrocities of organized arson over the whole of Australia simultaneously. But nowhere else in the pacific area? I’d be inclined to think that the radical muslims in Australian communities are not so organized to be able to pull off such a stunt in the short amount of time they had to start all the existing fires. Not by themselves anyway, and not without the Australian government knowing about it. The little dots of fire in the albeit manipulated and colored satellite image below indicates many arsonists.

The thing is that Australia, or at least certain individuals in Australia, in the late 2019 put in a higher gear in both politics and media, as they have become tougher against Beijing. That’s what it seems like anyway. In november 2019, Australian 60 minutes, made two tough reportages of which both had the prong aimed at Beijing China.

WORLD EXCLUSIVE: CHINESE SPY SPILLS SECRET TO EXPOSE COMMUNIST ESPIONAGE, was about a former Chinese spy that wanted to defect to Australia. His only weapon was the truth. He said in the interview that he knew that the only possible way to receive an Australian citizenship was to cooperate truthfully with the Australian authorities. He also knew that he was going to die should he be compromized by the Chinese in Australia or if he was sent back to China with his family. The producer’s name was Grace Tobin.

Only days before that reportage the Australian 60 minutes did an important reportage, INVESTIGATION: WHY IS CHINA ON THE MOVE IN THE SOUTH PACIFIC. It was a reportage that was a real threat to Chinas interests and plans for the whole region of both the South China Sea and several strategic islands in the Pacific Ocean. The reportage was much about the allegations of corruption against the president of the Solomon Islands involving the Chinese, who was accused by Daniel Sudaini, the premier of Malaita. Malaita is one of Solomon Islands’ largest and most populous provinces.

They talk in Australia about what China calls ”The Blue Economic Passage” which is supposed to go through the island of Kiribati down to Antarctica passed the Eastern waters of Australia. The Australians believe the name is just a cover story for a comprehensive plan to dominate the region. In the Solomon Island there is a gold mine now signed over to China. And in Bouganville in Papua New Guinea there is a gigantic gold/copper mine that Beijing is really interested in. But in Papua Guinea they are still open for other offers.

Now, about the fires in 2019-2020. They are not yet (mid January 2020) the largest fires in Australian history, but they are the most devastating and closer to urban populations than ever before.  Bushfires in Australia can occur all year-round, though the severity and the “bushfire season” varies by region. That is why these fires are so suspicious since they occure all over populated Australia at almost one and the same instance, as seen in the image below. They are taking place in 6 territories simultaneously. Only in the fires of 2006-2007 did something similar happen, then in five territories. Of course it could happen that all over the continent there were thousands of thunder clouds at once since lightning normally is the number one incendiary for bushfires. Were there?

I suspect that Beijing now is feeling safe enough to ”cut Australia loose and sink it”. But they may have acted just a little bit premature out of anger towards the Australian journalists and politicians. What we do know is that bushfires at this scale is by far the cheapest and simplest way to brake the Australian economy. We also know that there is a power struggle going on between China and the US in and around the South China Sea and that the US as well as China have high stakes in the Persian Gulf right now and the US needs Australia as a dairy supplier to the US Navy, now more than ever since the US is losing more and more markets in the region with China’s growing influence. Yes I said dairy supplier. The US Navy and the US Marines march on their stomach, and they can be stopped if they cannot. The US needs access to the harbor in Darwin, as I have discussed in a previous lesson. 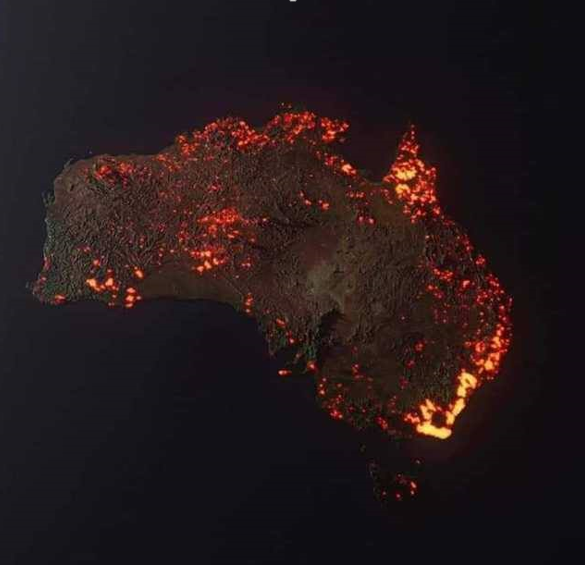 I come from Arboga, Sweden, same latitude as Stockholm, Oslo and Helsinki. The year in which I was born was 1965. But I grew up in the region of Scania in the south end of Sweden. I believe in God and his son Jesus Christ but I still don’t go to Church. I don’t know what else to say about myself so I’ll stop here. The truth is, you wouldn’t know me if you had read a book about me. I’m pretty unique I like to think. We all are, but especially me. Roger M. Klang, civis Lundensis View all posts by Roger Klang